If you were born in the eighties or nineties, you definitely know Rocky. The first movie in the series came out in 1975. It cost only a million dollars, and was filmed within 28 days. Five further films followed, with the last of them released in 2006. The entire series was written by Sylvester Stallone, who also starred in the leading role: an underdog boxer who always manages to win, against all odds (in the fine American tradition). 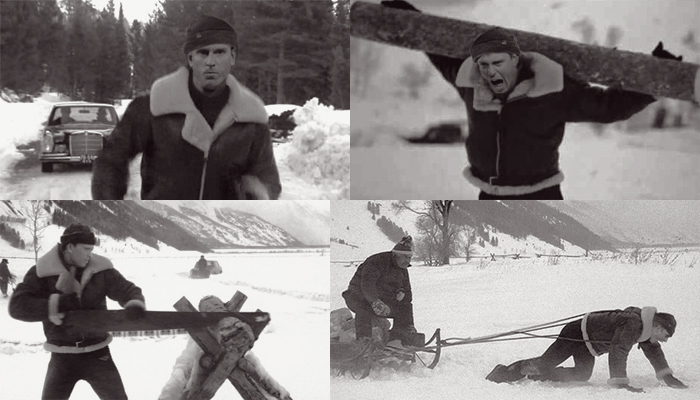 In the fourth movie in the series, Rocky, played, of course, by the Italian Stallion Sylvester Stallone, is invited to a world championship match against Ivan Drago, a huge, muscular Soviet fighter. This part of the movie switches between scenes of Rocky’s training and Drago’s. While Drago trains using high-tech equipment, professional trainers and advanced monitoring systems, Rocky went for the low-budget workout.

His training consists mainly of flinging tree trunks, pulling sledges loaded with snow, running in the snow, climbing snowy mountains, and other difficult stuff that one does in the snow. Rocky wins, of course.

In life in general, and particularly on the internet, Cinderella stories sometimes happen, but they’re pretty rare. In order to succeed, you need to have a good product, give good service, work hard, be skilled and have money, sometimes a lot of money. People without means receive lower standards of legal representation, worse health care – and it’s the same in the field of PR and online reputation management too.

The reputation management industry is no different. Every day, private individuals and companies purchase services from expensive reputation managers in order to determine how they are going to be seen on the internet by those searching for them. The many online reputation services out there stand as proof of this. Even though the reputation management services merely push unwanted results away, and don’t actually delete them; since the vast majority of us (92%) don’t ever look beyond the first page on Google, the result is practically the same.

A few days ago, on the 13th of May, the European Court of Justice passed a revolutionary ruling against Google. The court ruled that Google has to remove from its search engine information concerning people requesting to be removed – or have, as the court called it, “the right to be forgotten”.

Personal reputation management services are fairly expensive, and the demand for them comes mainly from celebrities, doctors, businesspeople, lawyers and politicians (often designated as ‘high profile individuals’). But what about all those people whose online reputation was smeared 15 years ago by a bitter partner? Or a customer who felt cheated? Without going into questions of justice or morals, if you don’t have a couple thousand dollars to spend on a basic campaign to clean up the first page of Google results, you’ll probably stay with the problematic online profile for a long time, which comes at a price.

The Court of Justice ruling is trying to create some sort of social justice. They’re trying to balance between the right to privacy and the freedom of speech, and to force Google to freely provide an expensive service with high demand.

On the one hand, the court ruling makes a lot of sense: there are references out there that are no longer relevant. Speaking as someone working in this field, and providing online reputation management services, I think that in certain cases there really should be a simple mechanism of deleting certain results. The question is what mechanism, what kind of results, and who gets to decide. These are questions that the court left unanswered, and effectively passed the ball to the 28 regulators in the various European countries, who will each have to interpret the ruling in their own way.

On the other hand, the internet as a whole and Google in particular are two bodies perhaps most strongly identified with freedom of speech: the internet, of course, is not supervised by anyone. Anyone can post anything they want on the internet, with no limitations and no censorship. On Google, too, the leeway to assert one’s freedom of speech is huge. Google removes references from search results only if they are identified as spam, or if they are ordered to by a court in the United States. Other cases are relatively rare.

Try typing the word ‘Jew’ into Google, and you might see a paid ad come up. Click on it to read how Google interprets freedom of speech.

So, what can be done?

Individual predicaments have always existed, and will probably always continue to serve as a business opportunity for others. Many of these cases are legitimate, and some are not. The internet makes it very simple to violate the privacy of others, and the harm done can be particularly quick and painful, especially since the negative result will remain online under your name for a long time, maybe even forever. That’s why I believe that certain cases call for a quick and simple solution that can respond to certain cases of reputation harm.

Online reputation management companies are overflowing with work, even without dealing with the removal of a negative reference to the financial difficulties of Mario Costeja Gonzalez from 16 years ago.

In the next few articles, I’ll outline why, in my opinion, the present ruling will not change the current situation, and I’ll also suggest a possible model to deal with the problem.